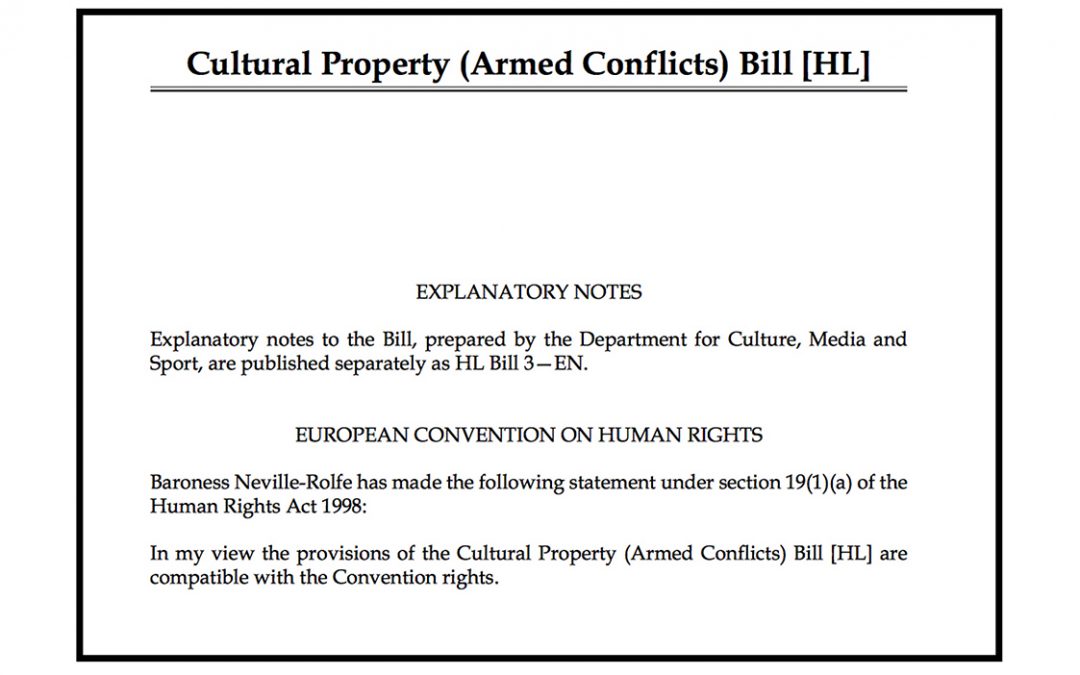 The new Cultural Property (Armed Conflicts) Bill must include vital changes if it is to be workable, says the Antiquities Dealers’ Association (ADA).

Most important is a clear and acceptable definition of what constitutes cultural property under the law, firstly so that everyone knows exactly what the regulations apply to and, secondly, so that the measures do not unintentionally blight artworks and objects that have nothing to do with this issue.

This is not just about the trade; implications for refugees and the military add to the importance of getting it right, says the association.

“The ADA very much supports measures that protect cultural property and archaeological sites, and we are active participants in the All Party Parliamentary Group (APPG) reviewing cultural property,” said ADA chairman Chris Martin. “That work has fed directly into the Government’s Impact Assessment for the new Bill, which acknowledges the importance of the ADA’s code of conduct in exercising robust due diligence.”

The association notes distinct improvements on the unadopted 2008 draft Bill that failed to address a number of difficulties, but argues that serious concerns remain. For example, the new Bill, announced in The Queen’s Speech to parliament last month, adopts The Hague Convention 1954, whose “cultural property” definition is not specific enough.

While it cites “property of great importance to the cultural heritage of every people”, it also includes “works of art”, which could be just about anything and would have serious implications for the entire art market.

“We have no problem with adopting The Hague Convention in principle, but would argue that Article 1 of the UNESCO Convention – already adopted by 130 countries – is more appropriate,” says Martin, “because it restricts the definition to items of ‘outstanding universal value’ in terms of cultural heritage.”

In 2008 the Government stated its intention as being to “protect the nation’s most important cultural property” in relation to ratifying the Hague Convention, so the ADA argues that the new Bill should reflect this intention and not expand its remit to cover a much wider field of artworks, even unintentionally.

“If it is not possible to alter the wording of The Hague Convention’s definition under the new Bill, then the Government should include an additional clause to clarify its intention,” says Martin.

As was highlighted in the 2008 draft, the armed forces observe a ‘No Strike’ policy when it comes to significant cultural monuments, treasures and archives, which is exactly why the enemy often position themselves there. At some point, however, military commanders have to decide whether the need to strike outweighs the need to preserve the cultural property.

The new draft bill now addresses this by introducing a waiver on the grounds of “imperative military necessity”.

The draft also comes closer to defining the term ‘occupied territory’, a pre-requisite for judging whether items have been illegally exported or not. While areas of the Middle East might obviously be conflict zones or occupied territories, numerous other regions across the globe might also qualify without that being evident.

In 2008, the Government expressed its concern that people unintentionally risked prosecution for handling illegally exported items if a clear definition of ‘occupied territory” was not forthcoming.

The Government has also narrowed the term ‘dealing’ under the Bill, defining “acquires’ as meaning ‘buys, hires, borrows or accepts”, while ‘disposes of’ covers “sells, lets on hire, lends or gives”.

“This addresses concerns that the previous, looser definition might interfere with due diligence, but people need to be aware that in several ways the definition of dealing means simply handling the objects,” said Martin.

Another area of concern is the proposed rules on returning seized property if it is not forfeit.

While the Bill states that it should be returned “as soon as is reasonably practicable”, it goes on to state that if this is not possible within 12 months, “the property may be disposed of in such a manner as the person who for the time being has custody of the property thinks appropriate”.

“We would want some clarification on this as it is possible that this clause could be exploited by the unscrupulous and could well be detrimental to the interests of refugees, not just the trade,” said Martin.

When the measures were discussed eight years ago, the Culture Select Committee also highlighted the difficulties for fleeing refugees, observing that to expect a country undergoing occupation – when most refugees would be leaving – to have a workable system of export licensing “seems a little unrealistic”.

However, the new draft Bill does not appear to tackle this issue at all. This means that without the correct paperwork, refugees are likely to find their valuables tainted and impossible to sell when they most need the money.

The ADA believes that this taint might also put the Bill in direct conflict with the Human Rights Act, which legislates for the free enjoyment of property.

“We recently raised these issues with the United Nations Security Council’s sanctions monitoring team when they consulted us on the issues of Syria and Iraq. In our view, if you can’t define what something is, then you cannot legislate for it effectively,” said Martin.

“We are keener than anyone to prevent looting, not least because it is the legitimate trade’s reputation that criminals risk tainting by their activities. The highly robust new Code of Conduct we have recently drawn up sets the standard for others to follow and illustrates the serious intent of the association in promoting honest dealing.”

That has included lowering the price threshold at which the ADA requires members to carry out additional due diligence measures from £10,000 to £3000.

“We will be back in discussions with the APPG later this month and will raise our concerns with them then,” said Martin.